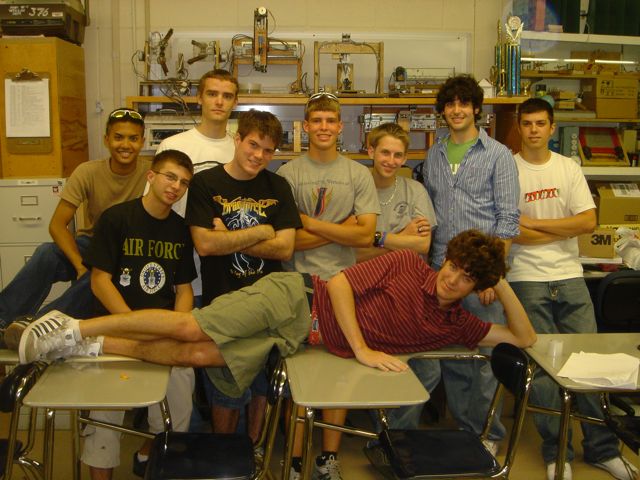 This was a tough & challenging year.  Quite a few people, despite my warnings, bit off more than they were willing to chew...  Four students' projects fell into disrepair and weren't finished, but at least they lent a hand to their fellow students and helped them to succeed.
Kanit Dararutana attempted to create a  Rubik's Cube® solving robot.  His design required metal gears that were available in certain HP® printers.  Unfortunately, there was only one gear in each printer, so Kanit ended up disecting 21 printers to satisfy his gear requirement!  Most unfortunate, Kanit was absent the day of presentations, so photos of his project are scarse...
Dan Goeggel designed a computerized engraving machine which engraves the connectors of XLR audio cables to mark them for ownership.
John McSorley created a fully automated braille printer, takes whatever you type into the computer & creates the corresponding raised braile counterpart.
Kevin Montgomery built an automated "Abacus Calculator" which will move beads around to represent the numbers entered into the computer.
Dan Glickman constructed a robotic CD Burner which automatically moves a blank CD from the feeder bin to the CD Burner.  After the CD is burned, the robot removes it from the drive & places it onto the "done" pile.

You can help support this wonderful experience:  We're always looking for old, "dead" dot-matrix printers, discarded disk drives, CPU's and CamCorders-- they're a valuable source of motors, gears, belts, pulleys, tracks, etc.  If you have some old equipment that you don't need any more and would be interested in donating it for use in the course, kindly contact Jack Bozzuffi at 856-264-5644.