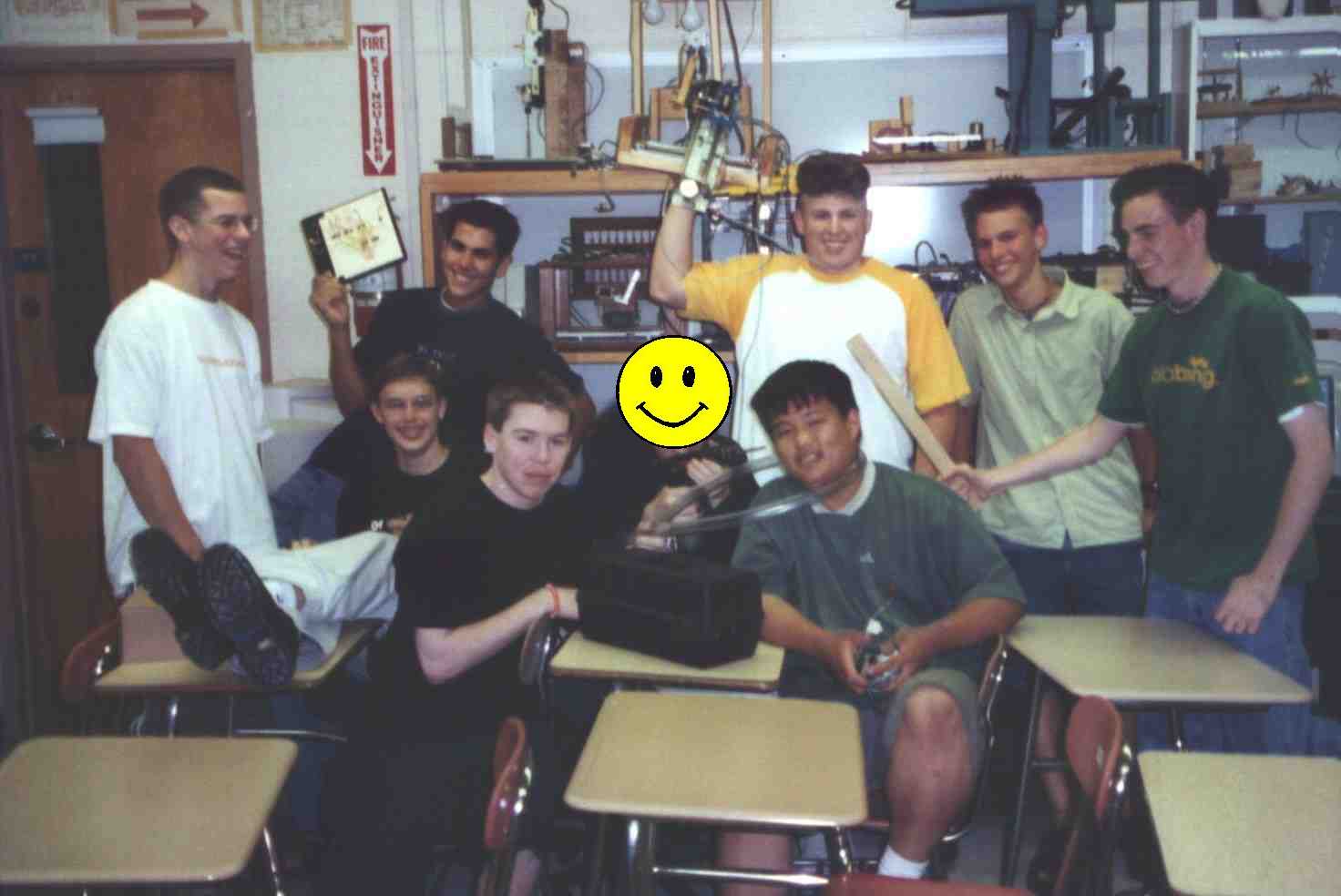 This year, Kevin Rohner decided to create an automatic coffee grinder.  His vision was a computer-controlled blending machine that would select various coffee beans from individual bins, measure appropriate quantities into the grinder, grind the blend and deliver the resultant grinds into the awaiting receptacles.

Chris DeAntonio chose to create an automated test tube cleaner, featuring a rotating brush that dips itself into a cleaning solution and then proceeds to scrub any number of test tubes in any sequence entered into his computer terminal.  Chris' project nicely demonstrated his robot's "accuracy" and "repeatability" requirements.

Other students in the class created equally challenging projects:  Tony Fast created the "lazy man's CD player."  His robot receives song selections from the keyboard, and then proceeds to "jog" around to press the appropriate buttons on the CD player to select the correct track and then press the play button.  Derek Blumenthal designed an automated label maker that would accurately punch out plastic stick-on labels for any text entered into his computer.

How many WTHS students does it take to screw in a light bulb?   Thanks to Justin Bram's "Bulb-O-Matic," none!  His robot searches out "dead" bulbs, unscrews them, puts them aside, gets a new bulb from a source bank, and screws in the replacement bulb-- this one is just plain fun to watch!

Sean Walsh decided to turn a bunch of old printer parts into a plotter, which would receive text from the keyboard and proceed to draw out the message with his robot-controlled markers-- very neat printing controlled by a rather extensive font program.

Pxx Mxxxxx attempted to create an "automatic house builder" which would pick up Lego® bricks one at a time from a feed bin, and proceed to lay them down in a pre-determined sequence to build a miniature house.  Although some last minute "technical difficulties" prevented completion of the project, Pat came up with several very clever solutions to difficult problems along the way.   Likewise, Dennis Choi's attempt to create an "industrial strength" engraver/drill realized some setbacks.  His "Tim-the-Tool-Man" "bigger & stronger is better" approach kept him in the shop longer than the timeline allowed, but he developed some mighty fine welding skills along the way!

The "best of show" this year was Tim Bennett's "Abacus Tutor" robot.   His finely-crafted robot looked more like a polished piece of furniture than a robot, yet it worked like a well-oiled machine.  His device automatically cleared his hand-made Abacus (an early calculating device from about 3000 BC that used beads to keep track of digits), gave the user a choice of mathematical operations, allowed the entry of two numbers to work with, and then demonstrated the entire operation by automatically moving appropriate beads while explaining what was happening on the computer screen.   Tim also provided a second Abacus for the learner to "mimic" the robot's actions during the learning session.

The course is challenging and even frustrating at times, but also very rewarding.  The students frequently show up before school and spend many hours after school to work on their projects and programs, learn more about the new equipment, and the like.  Interest and excitement is high, and real-world applications are endless.

You can help:  We’re always looking for old, “dead” printers, discarded disk drives, VCRs and CamCorders-- they’re a valuable source of motors, gears, belts, pulleys, tracks, etc.  If you have some old equipment that you don’t need anymore and would be interested in donating it for use in the course, kindly contact Jack Bozzuffi at 856-264-5644.