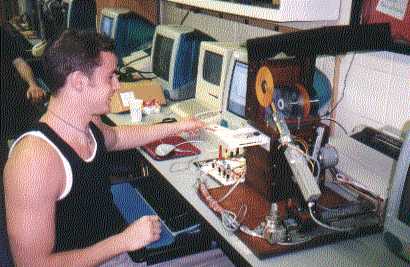 "You've entered a world full of robotic devices that act upon your will.  On this  particular adventure you shall experience THE ARM. From here on out there will be no further placing of CD's manually.  This mechanism along with its artificial intelligence will,  on command, take the CD that you have chosen and promptly place it in the CD player.  There is no need to operate that either.  It is taken care of.  Just sit back, relax and choose  away................"

What my intro eludes to is my project, the CD jukebox - "THE ARM."  It has another name, "Amy," because the robot gave me just as much trouble as she did  ;-)   The Arm was very intricately designed as four main pieces. First, there was a motor to move the arm from right to left just as the shoulder would.  Next, there was a large motor to swing the arm similar to how the elbow acts.  Then, a third smaller motor sat near the end of the arm to turn the CD as your wrist would.  Finally, at the end of the arm there is a gripper mechanism that grabs the CD as a hand would.
The first motor moves the arm back and forth to select a CD from the rack opposite the arm. then the elbow motor would swing down the gripper to the center of a vertical CD.  The gripper would retract and move inside the center hole.  It would then release and the elbow would swing back the CD.  The shoulder motor then takes the arm in front of the CD player.  A signal from the computer opens it, the wrist motor turns the CD to be horizontal and the elbow places it in the drive, and it closes.
When you're done with the CD you simply hit "enter" and it replaces it for you, then asks if you would like to choose again. You never have to get up and manually place a CD into its player again............... (see project complications)