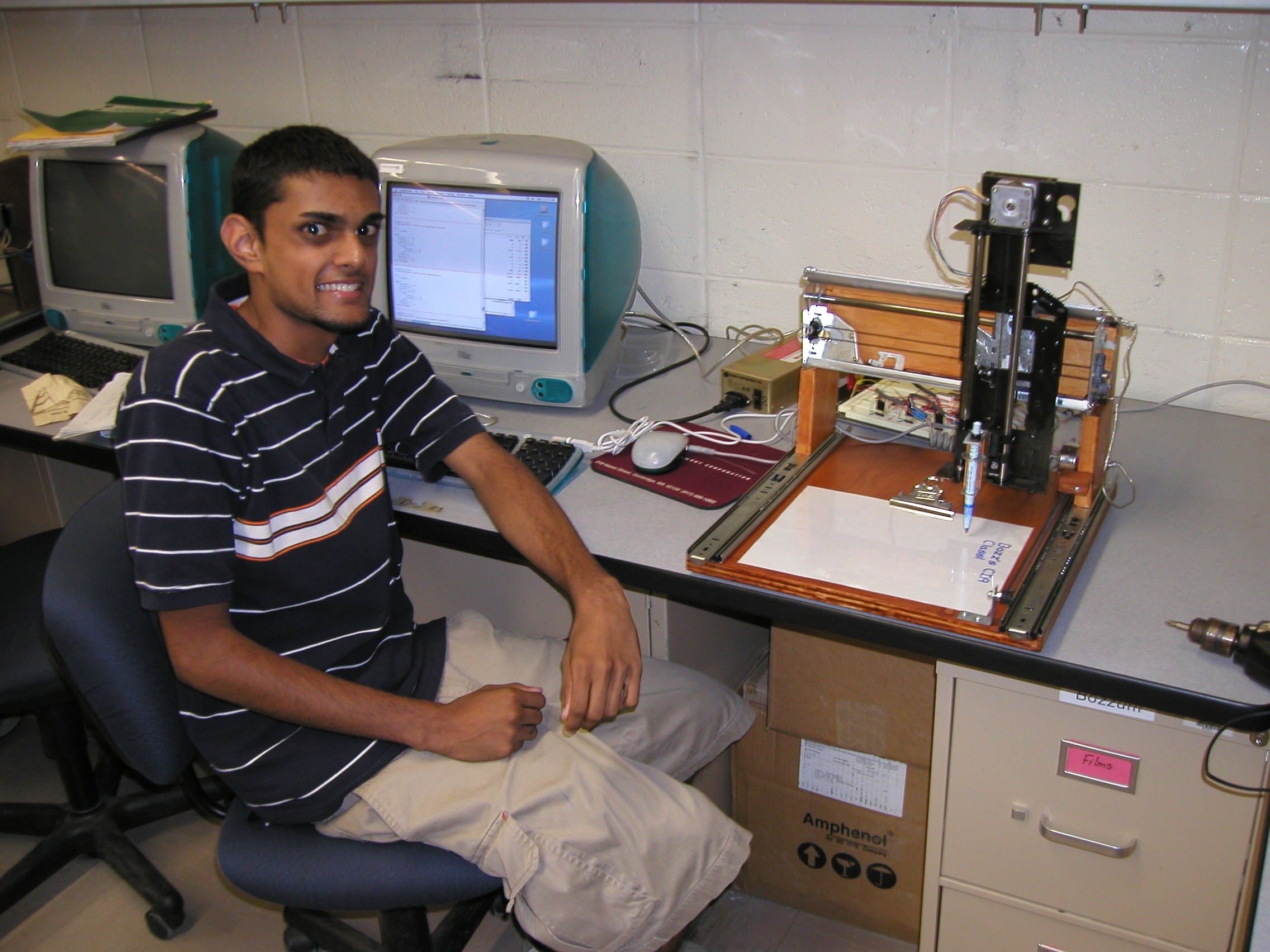 
The "Robo-Writer"
During the summer of 2003, I began working on ideas for possible robots.  As the school year began, my original idea of the Robo-Writer was very different.  The first design was to have this robot write backwards on a transparency, and then lift the transparency up, as well as shine a light on it to make it a working overhead projector. As I began more design work this idea seemed to fade.  It was then I came up with the current idea and currently presented one of Robo-Writer. It now solely writes on the transparency, forward plain text.
The actual idea of making a machine that writes anything seemed a bit confusing.  As I continued work on the design, I began to realize I have the full power to control its movements, as well as create its font.  The main task of the robot is to write any statement given by the user.  For simplicity, I have just programmed the robot to write in semi-box letters.  As I continue to work on this project I hope to make full round letters and eventually maybe in a few years, cursive text.
The main work began in class.  We learned the basics of mechanical instruments and motions.  We then progressed to electrical devices that were used to control the robots mechanical movements.  A major step in robot construction and movement came with computer interfacing.  We spent a lot of time learning and understanding the concepts of the computer.  To move motors, this requires a sequence of pulses that are sent from the computer.  The movement for an individual motor requires another signal from the computer.  All of these signals are sent together.  As we began to understand the concept of binary and computer signals, we then looked at separation of signals and computer connectivity.  The final step piece to connect the robot the computer was the breadboard.  By connecting our project motors to the breadboard and the breadboard to our computer, we are now able to run a computer program that dictates the movement of robot.

To make this move in the correct ways,  we first begin by using limit switches.  These are used to "home" the device to a starting position.  From there, we used our computer program to keep track of its current position and specific information about each motor.  To ensure easy movement of the transparency marker, a precise number of motor steps are used to just glide over the transparency as it writes, instead of jamming the marker into the transparency.  To make the motors work, we used a program that aided in finding out the exact wire configuration.  This is essential for the robot to move in all directions with a smooth continuous movement.
After a lot of time with construction and rebuilding, the final product is seen in the pictures.  The knowledge we gained from this class was used continuously through out the construction of "Robo-Writer." We made multiple small projects to understand proper construction techniques, as well as understand core concepts of the robot.  The most important lesson taught was to use common sense.  By putting together everything we learned in this class, came the creation of this robot, the "Robo-Writer."