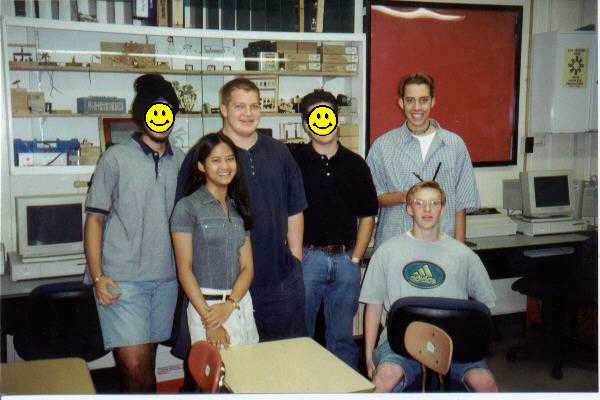 This past year, Ariya Dararutana took on the challenge of creating a manipulator that automatically moved circular disks to solve the famous “Towers of Hanoi” puzzle.  Through computer control, Ariya’s project moved a stack of various-diameter wooden disks from one peg to another with the restriction that a larger disk may not be placed on top of a smaller one.  Using “recycled” parts from discarded printers, disk drives, VCRs, and even fishing tackle, Miss Dararutana broke the “curse” and successfully engineered a device that successfully solved the puzzle.  (Students in previous years came close, achieving movement and control, but didn’t successfully solve the puzzle.)

Rob Nagele successfully engineered a computer-controlled embossing device that could etch intricate designs into thin sheets of aluminum and copper.  Besides programming code that would automatically scribe various geometric figures and even an intricately designed sailboat scene, Rob also allowed control of the mechanism to be turned over to the user to define new shapes and designs “on the fly”.  This program was called Foil Art.

Other students in the class created equally challenging projects:  Dave McClain created an apparatus that moved pieces of a chess set through classic moves.  Kxxxxxx Sxxxx chose to design an automated drill press designed to drill patterned holes in wood.  Dave Drozd’s mission was to design an mechanism that would automatically move pieces of the game “Connect Four” to appropriate positions directed by the players, while Sxxxxx Sxxxx chose to design an arcade-style mechanical crane that would “snatch up” pieces of candy by responding to signals from the user.  Although some of these projects ran into “problems” too involved to solve within the timeframe of the course, everyone walked away with a very thorough understanding of computer and robotic systems and the way they work.

The course is challenging and even frustrating at times, but also very rewarding.  The students frequently show up before school and spend many hours after school to work on their projects and programs, learn more about the new equipment, and the like.  Interest and excitement is high, and real-world applications are endless.

You can help:  We’re looking for old, “dead” printers, discarded disk drives, VCRs and CamCorders-- they’re a valuable source of motors, gears, belts, pulleys, tracks, etc.  If you have some old equipment that you don’t need anymore and would be interested in donating it for use in the course, kindly contact Jack Bozzuffi at 856-264-5644.