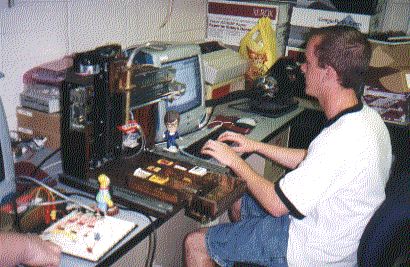 The vacu-matic candy machine, a marvelous project which will forever be remembered.  The idea occurred to me when is was buying ice cream from the lunch room.  Basically I miniaturized it and used it for candy.  The basic idea is that the user inputs their choice, and the vendor retrieves it for them.  It does so by using three degrees of freedom:  the x-, y-, and the z-axis.  The vendor also remembers which candy was selected so it can move down to the next layer if that candy is chosen multiple times.  This action allows for multiple selections of one candy without refilling it.  The candy boxes must be refilled once the program is shut off.
This is a project which I spent countless hours on, and became frustrated with at times, but also became enlightened along the way and joked when it started to work.  It was tuff but worth it for all the lessons I learned, which I will never forget.