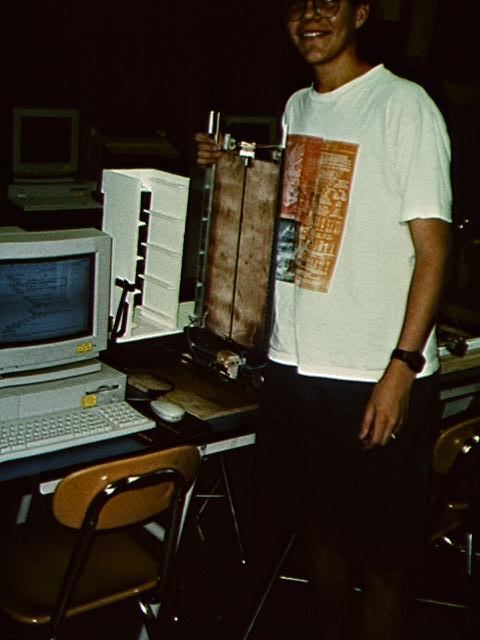 The apparatus is a jukebox which is basically composed of two main parts.  One is the actual mechanism used to pick up the CD's and place them in the CD player.  The other is a 'tower-like' structure of CD's with a CD player at the bottom (see picture). 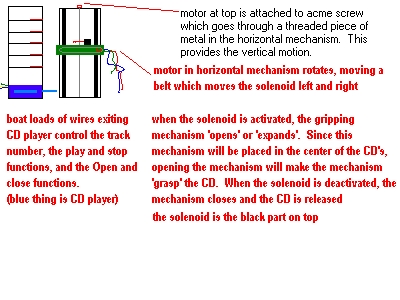 The mechanism for motion is supported vertically.  It has two parallel, vertically arranged sliders placed near the edge of the mechanism.  Attached to the sliders is a mechanism which provides the lateral motion for the grasping mechanism.  This part of the juke box moves vertically.  There is a motor, with an acme screw attached using a coupler at the very top of the vertical structure.  This acme screw runs through a threaded piece of metal which is attached to the horizontal "arm."  When the motor turns, it causes the structure to move up and down, using the sliders as a guide.  The horizontal mechanism contains a motor with a belt attached.  The belt is connected to a platform containing a solenoid.  When the motor turns, the platform moves left or right.  On the platform is a solenoid/spring apparatus.  The solenoid is attached to two brass tubes (one inside the other).  The larger brass tube is permanently attached to the side of the solenoid.  The smaller tube is attached to the moving part of the solenoid.  The spring keeps the solenoid in an extended position, except when a current is run through it, in which case, it is activated and it pulls the metal part into the solenoid into the coiled part.  The ends of the brass tube were bent so that they could grasp the inside of a CD when the solenoid is activated.  (I can visualize it, but it's hard to explain..I think I'll just draw the the thing now):

(That little thing took so long to make!!).  All of the motors have wires which run through a bread board.  There are also wires from the CD player which were placed so that they would activate several functions of the CD player like the Play, Stop, Next Track, Open and Close functions.  All of these wires go through the bread board and are connected to the computer through an electronic interface. First, the program initializes the motors using sensors located at the bottom of the tall vertical structure and another sensor on the horizontal motion mechanism.  The program prompts the user who then gets to choose which CD he/she wantes to play (1 through 5).  Then they are prompted to choose the track they want to hear.  Then, the top motor rotates the appropriate number of times so that the structure rises to the correct level of the CD.  Next the motor responsible for horizontal motion moves the solenoid structure right above the middle of the CD.  The vertical motor makes the structure lower slightly, into the CD.  The solenoid is activated and the CD is grasped.  The structure moves up a little, and then the horizontal motor pulls it back.  The vertical motor lowers the structure, then a signal is sent to open the CD player.  Once opened, the vertical motor lowers the CD into the tray.  The solenoid is deactivated and the vertical motor raised the structure a little bit.  Then a signal is sent to close the CD player.  Next, multiple signals are sent depending on what the track number is, and then the play button signal is sent.  To pick up the CD, a similar process occurs.  Once the CD is grasped, the structure rises and returns it to its original location on the tray.